Dubai Hosting the 1st Seminar of the Anti-Smoking International Alliance 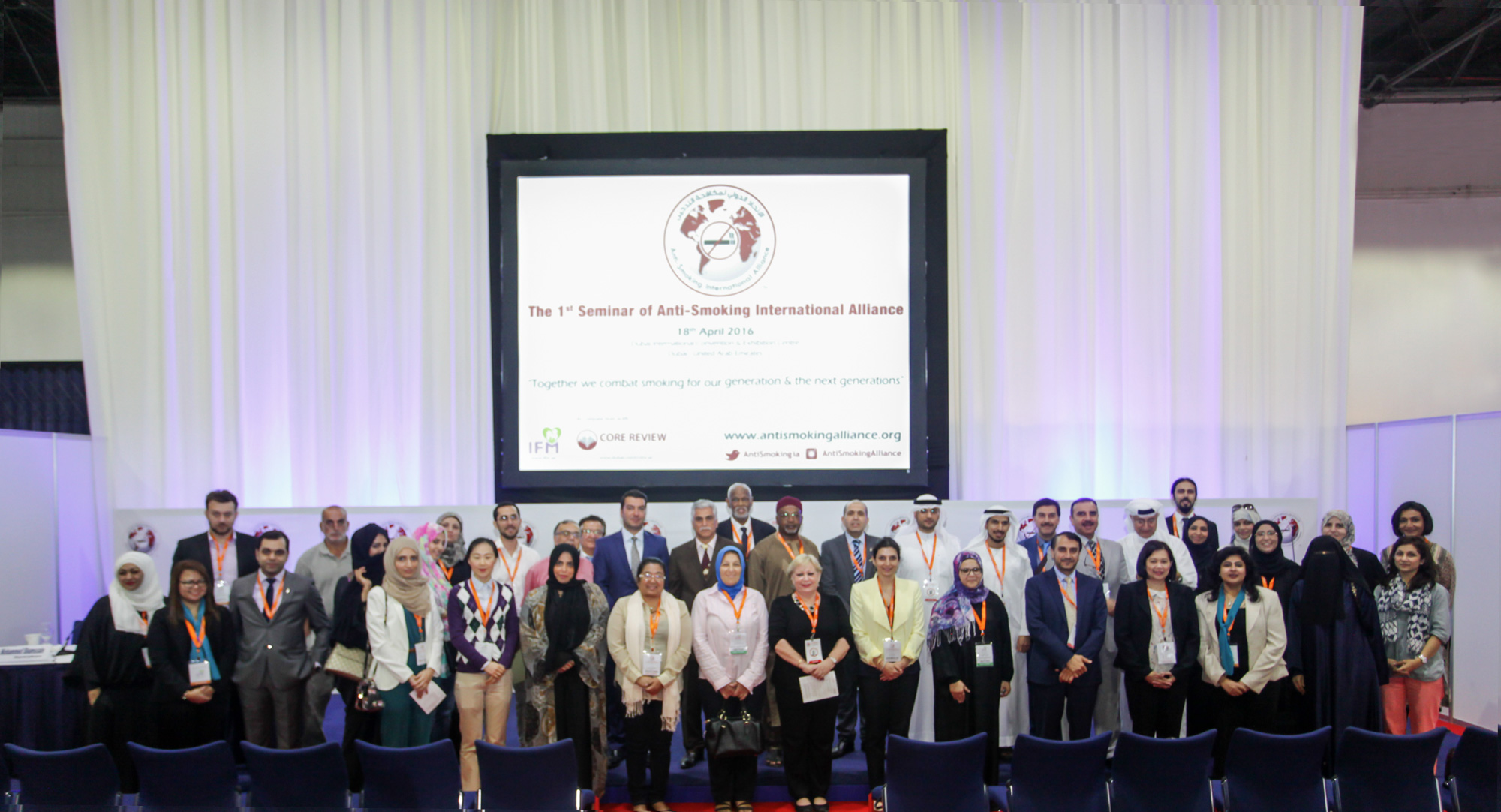 Dubai – United Arab Emirates, April 19th 2016: The Anti-Smoking International Alliance -ASIA organized a seminar in Dubai aiming to spread awareness about the harmful effects of smoking and helping community to follow the required steps to quit. Fifteen speakers from 10 countries from different health, academic and educational backgrounds came to share their experiences and knowledge with the audience yesterday. The seminar covered a number of interesting topics about this unhealthy habit and the consequences on individual’s health and the people around him. The seminar was held under the motto: “Together we combat smoking for our generation & the next generations”.

Dr. Abdul Salam Al Madani, Chairman of the ASIA welcomed all members and speakers to the seminar, and extended his gratitude to all participants and attendees who came to benefit from the seminar. The seminar sessions concentrated on spreading awareness and knowledge about the disadvantages of smoking and the negative habits associated with them that affects individuals, families and societies as a whole in addition to the unnecessary expenses.

Dr. Al Madani also explained: “imposing strict rules and regulations is not the only approach to eliminate this unhealthy habit, we should also join our efforts to spread awareness and educate the society about the consequences of smoking. We really need to educate families, schools and universities and include this topic in the school curriculum in order to raise a healthy generation that is aware of the negative outcomes of smoking.”

“Statistics revealed that smoking kills 6 million individual annually. Moreover, 80% of tobacco consumers lives in low and middle income countries. Those statistics are an indicator to the need for hosting more scientific and educational activities such as seminars and workshops, and we thought that this seminar will be the beginning for a series of educational activities that aims for spreading awareness among community.” Added Dr. Al Madani

Prof. Tawfik Khoja, Director General, Executive Board, Health Ministers’ Council, For Cooperation Council States emphasized on joining efforts in all GCC and Arab countries in order to combat smoking. He also refereed in his speech to a number of success stories for regional initiatives launched by some governments. He said in his speech: “together we can make a difference, not only to our generation but to the generations to come. We should join our efforts to adopt several approaches and initiatives and apply them on all GCC countries.”

“In 1979, we started a mission to combat smoking in the GCC. The mission was very successful and we issued more than 45 regulations on a ministry level since then. Our efforts to combat tobacco has shown dome effectiveness, however we still need some support from the society in general. We also need to start banning ads that promote cigarettes and also ban sponsorships for games and competitions.” continued Dr. Khoja

Dr. Partha Nandi, Internal Family Physician, Creator and Host, Chief Health Editor in the United States delivered a very impressive presentation during his participation at seminar. Dr. Nandi referred to education and public awareness, he also said: “we need to deal with tobacco as a killer and smoking as disease. We need to treat those people not blame them and we should start at family level then empower public. The amount of money spent on this bad habit is massive, and the number of individuals who die from smoking every year is 6 Million human individual. Moreover, there are 500$ Million dollars spent annually on medical treatment. There are also 1 Million smokers in the world right now and 100,000 kids will start smoking as we speak.”

From his side, His Excellency Dr. Ali Alwadey, Supervisor General, Tobacco Control Program, Ministry of Health in KSA shed the light on the important role of governmental and official organisations to eliminate this habit. He also shared with the members and the audience the experience of KSA in this matter. He said: “our main objective from this seminar is to encourage international cooperation to fight and combat smoking. In KSA, we have been working hard for the past few years to provide preventive and curative services through mobile clinics to help smokers quit.”

Dr. Ali also said: “KSA is the first country in the world that promoted the mobile clinics in public areas throughout the country. The goal behind this initiative is to gather all related sectors in KSA to work side by side to combat tobacco including ministry of education, finance, customs and trade. We have also launched a cartoon character named “Battalt” which means “I quit” in favor for this initiative and also to spread awareness among kids and teenagers through all media channels and advertising in an endeavor to show them the unpleasant outcome of smoking.”

At the end of the seminar, speakers and members agreed unanimously on a number of recommendations for this year that focuses on spreading awareness among community and educate them about the bad outcome of smoking. The members also focused on banning the e-cigarettes and try to stop all advertisement that promote them.

On this matter Mr. Mohammed Al Houqani, Assistant Dean for Education and Academic Affairs and Assistant Professor and Consultant at the UAE University said: “The harm caused by smoking e-cigarettes is much worse than traditional smoking. E-Cigarettes initially were introduced as a way to reduce smoking and by time quit, but unfortunately it is used to now as a tool to promote smoking.”

“Until now, we don’t know exactly what the chemical components of the E-cigarettes are and we assume that there is significant harm that have not been discovered yet.” Continued Mr. Mohammed

Members of ASIA also presented full studies on the chemical reactions inside the e-cigarettes and provided proofs how those reactions are higher than the normal cigarette because e-cigarettes contains more than 45 poisonous chemical components in addition to nicotine itself and multiple heavy metals that comes out of the battery. Moreover, statistics have proved that the toxic flames that comes out of smoking reach others as well and that’s what is called second hand smoking, and those toxic flames are defined by the WHO as dangerous and prohibited for humans. Members also proved that nicotine have the potential to reach the central nervous system within 7 seconds after it reaches the lungs.

The Anti-Smoking International Alliance was founded in 1991 in London, as a nonprofit organization with a vision to spread awareness about the unhealthy consequences of smoking among society in general and those working in the health sector in particular. The ASIA also launched the “Tom Hurst Annual Award” for the best anti-smoking initiative proposed by professionals working in hospitals and medical centers, and after the success of this initiative, the alliance applied this initiative on different private and public sectors. Moreover, the ASIA received a number of awards and recognitions for their achievements, most notably the “Health Pioneer Award” in 2009.

In 2014, Dr. Abdul Salam Al Madani from the United Arab Emirates was chosen to be the chairman of the Alliance. Since he was selected to be the chairman of alliance, he worked in cooperation with the Board of Trustees of the Union on restructuring and drawing the outline of the objectives of the alliance in the future.