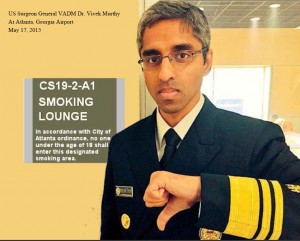 The newly appointed U.S. Surgeon General’s Commendation letter as attached warmly commended all our helpful Arizona and other collaborators working together for many years on Tobacco Control at city, state and national  levels. (both Past and Present) Our Arizonans Concerned About Smoking (ACAS) team thanks all who jointly deserve credit for the history making early  achievements of the past laying early foundations for others, plus those still vigorously moving forward. We especially commend both Tempe and Kingman, Arizona, passing their “NO Smoking in Cars with  Children” ordinances in May 2015, plus earlier City public Tobacco control law amendments  treating electronic cigarettes with the same restrictions in public and workplace NO Smoking Areas as regular tobacco cigarettes.

Arizona was actually the site in 1983 for achieving the World’s first totally Smoke-Free Hospital. It was at Keams Canyon, Arizona, U.S. Public Health Service  Indian Hospital on the Hopi Indian Reservation where both Hopi and Navajo  Indian Native American patients were served. We received strong support and International encouragement from Mr. Tom Hurst, Founding leader of The Anti-Smoking International Alliance (Erlier, The International Network Towards Smoke-free Hospitals), located in the U.K.

The above Attachment second page shows Arizona Medical Association ( ArMA) Resolution # 8-15. It stresses that stronger  Physician leadership is needed in the future for better educating both impressionable youth and adults about problems with electronic heated nicotine cigarettes and other similar aerosolized heated chemical emission gadgets.

With appreciation to Surgeon General Murthy & Warmest regards and thanks to all,

Letter and Photo – US Surgeon General