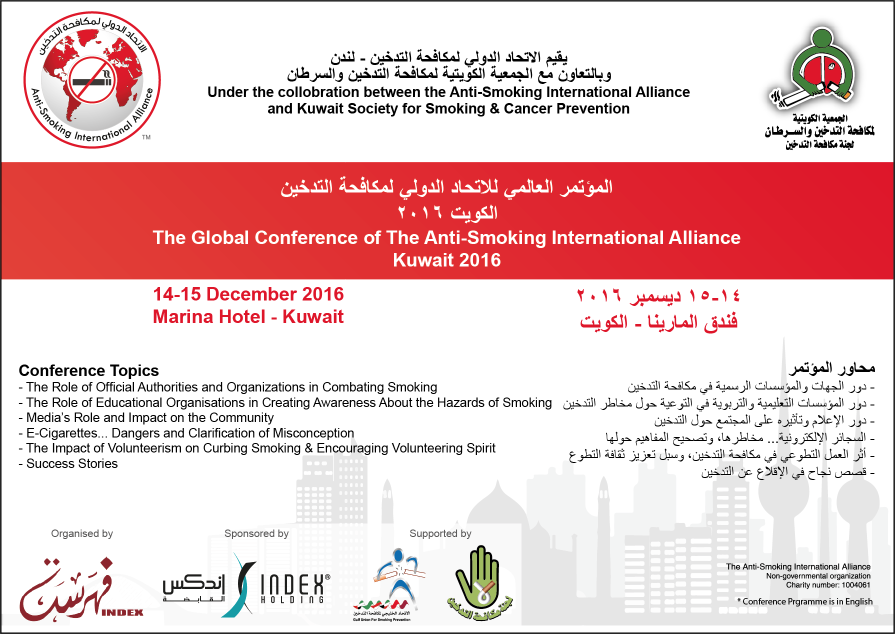 Dubai – UAE, May 30th 2016: The State of Kuwait have been selected among many countries to host the Global Anti-Smoking International Alliance Conference – 2016. The decision was made unanimously by the board of trustees at the alliance, and by this, Kuwait will be the first country to host the conference outside the USA and Europe. This announcement coincides with the “World No Tobacco Day” which is observed around the world on the 31st of May.

Recent statistics indicates that in the Middle East region and particularly in Kuwait; smoking is a significant threat on society. Meanwhile, the authorities and non-profit organisations are putting great efforts in combating smoking and saving the community, and in-line with this vision, the Kuwait Society for Preventing Smoking and Cancer, and a smoking committee are working diligently to organise a number of programs and events in collaboration with the Anti-Smoking International Alliance to host the Global Conference, which is being organized by INDEX Fahrast, a Kuwaiti national company from Kuwait.

The conference will be running for two days starting December 14th 2016 in Marina Hotel, Kuwait under the theme “Together we Combat Smoking for our Generation and the Next”. The event is designed to create a platform for specialists and public where they can share knowledge, expertise and tell their success stories in addition to the challenges that they have been through while quitting this habits.

Moreover, the conference will also shed the light on the tools & techniques used, and how the social community and concerned parties can join their efforts to combat smoking; especially after the numbers and statistics that have been announced at events organized by the Alliance and other concerned parties around the world.

Recent statistics revealed that there are more than one billion smokers around the world, which causes over six million deaths annually. As per the Tobacco Atlas released by the American Cancer Society and World Lung Foundation at the 16th World Conference on Tobacco or Health in Abu Dhabi in 2015; the percentage of smokers in Kuwait reached 31.3%. Moreover, there are 13 male and 1 female deaths who die as a result of smoking in Kuwait weekly. The Anti-Smoking International Alliance and the Kuwait Society for Preventing Smoking and Cancer had joined their efforts to hold this conference and send an effective message to the community in order to invite the concerned parties to participate and set new tools and techniques to prevent this malady.

Dr. Abdul Salam Al Madani, Chairman of the Anti-Smoking International Alliance and the board of trustees at the Alliance, have welcomed the result of the bidding considering this as step further to promote anti-smoking in the Middle East and Arab World. They have also expressed their optimism about the success of this conference, after the great results of the first seminar of the alliance in Dubai, the United Arab Emirates, in April 2016.

Dr. Al Madani said: “today is the World No Tobacco Day, and I am very proud to say that since 1991, the members of the Anti-Smoking International Alliance and I have been working relentlessly on educating the community about combating smoking, following our motto “Towards a Smoke-Free World”. It gives me great pleasure to remind everyone about their inherent natural powers and capabilities to cease any bad habit.”

“We need to join our efforts to reduce the number of smoking fatalities, as well as passive smoking, and that can happen by educating, advising and supporting each other to eliminate this malady. We should all stand together in supporting this endeavor, not only for the benefit of the human beings’ health, but also for the benefit of our environment and nature, in addition to help lower the spiraling expenses of smoking and the expenses of medical treatment that have recorded high amounts in some countries.” Said Dr. Al Madani

Moreover, Dr. Abdul Salam Al Madani expressed his gratitude and appreciation to the state of Kuwait, and its leadership, and also to H.E. Dr. Abdulrahman Al Awadi, Chairman of the Kuwait Society for Preventing Smoking and Cancer, and to Mr. Anwar Borahmah, Chairman of the Anti-Smoking Committee at the Society, Secretary General, Gulf Federation for Tobacco Control, for their unwavering efforts to build this collaboration beside their great efforts towards the community wellbeing and educating them on the dangers of the smoking and its consequences that effect the health, environment and economy.

Dr. Al Madani also extended his gratitude to Dr. Fahad Al Fadala, Director of INDEX Fahrast, and Dr. Esraa’ Aldeaiji, Conference Coordinator, for their great efforts in organising this conference and for their enthusiasm to achieve successful results which will reflect positively on the community, experts and the public.